INCLUD-ED’s has identified Successful Actions with universal components transferable across contexts. The implementation of these universal components during and after the INCLUD-ED’s Project in different territories has obtained relevant social impacts. That is, improving educational outcomes, enhancing social cohesion or increasing opportunities and quality of life for the population from the point of view of economic development (creating new jobs or identifying actions that generate new jobs) and quality of live. These social impacts have been achieved through the communicative research perspective that allowed a direct and active participation of the people whose reality was being studied throughout the entire research process. Their voices have been taken into account in order to contribute to overcome their difficulties. 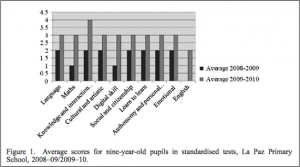 Evidence: Increase of the scores in a school with high rates of migrant students. 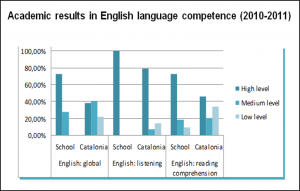 Evidence: High increase of the scores in a school with high rates in Roma student population (Catalonia).

Evidence: Increase of the scores in Alberich i Cases Primary School (Middle-Class Schools). 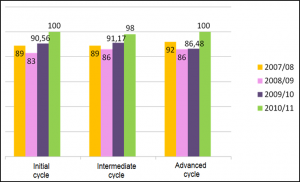 Evidence: Increase of the scores in a Rural school, North of Spain (in Castroverde Pre-school and Primary School). 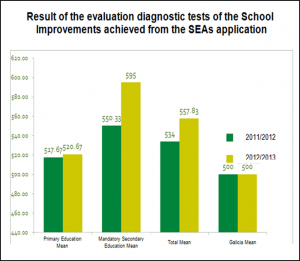 Evidence: In 2014, there are more than 200 Learning Communities, schools that are implementing SEAs, after the INCLUD-ED Project.

Evidence: Approximately 70 schools in Brazil and 23 schools in Peru, Mexico and Colombia are implementing SEAs (promoted by Natura Institute).

Evidence: More than 50 parent’s associations in Catalonia are implementing SEAs through the Xarxa-Clau Project (developed by the Federation of Parents’ Associations of Catalonia, FaPaC).

Social impact 4: Creation of employment in locations of extreme poverty *

Evidence: 586 jobs in one of the poorest neighborhoods in southern Europe (Miguel Fenollera cooperative), 10 permanent positions in the cooperative, 570 contracts in the agricultural sector and 6 in the educational sector.

A 10 year old pupil from a school with high rates of migrant pupils explained in the European Parliament her own and her classmates’ experience with Successful Educational Actions (SEAs). As Ania shows in the video: they learn more and they are more united. Go to the video

Mr. Rafael Layón, current member of  the Miguel Fenollera Cooperative and neighbour in one of the poorest neighbourhoods in southern Europe explained his own experience in overcoming exclusion through SEAs during INCLUD-ED’s Final Conference. As he explains in the video: he and other neighbours have overcome situations of extreme vulnerability after participating in SEAs. Go to the video

The research leading to these results has received funding from European Community's Sixth Framework Program (FP6/2006-2011) under grant agreement: 028603.